Fostering Apocalypse is a game I made as a part of incisor studios from february to june 2021. it follows the story of a woman, who once lost it all, finding faith in a demon who could end it all again. a post-apocalypse story about parenthood made in Unity 2d.

i lead the art direction, writing, and art asset creation on the project, as well as headed up hiring and project management. our team grew to be the size of four people including myself, with a programmer, sound designer, and music composer. as well, i hired an illustrator to make the game's cover.

aside from the art and writing, which is covered in-depth below, i acted as creative lead for the project, keeping the timeline for each member of the team realistic and making sure milestones were being met or adjusted as needed. a game made in the span of four months needed heavy oversight to make sure things stayed on track, and i worked most closely with the developer to maintain the art direction and execution. 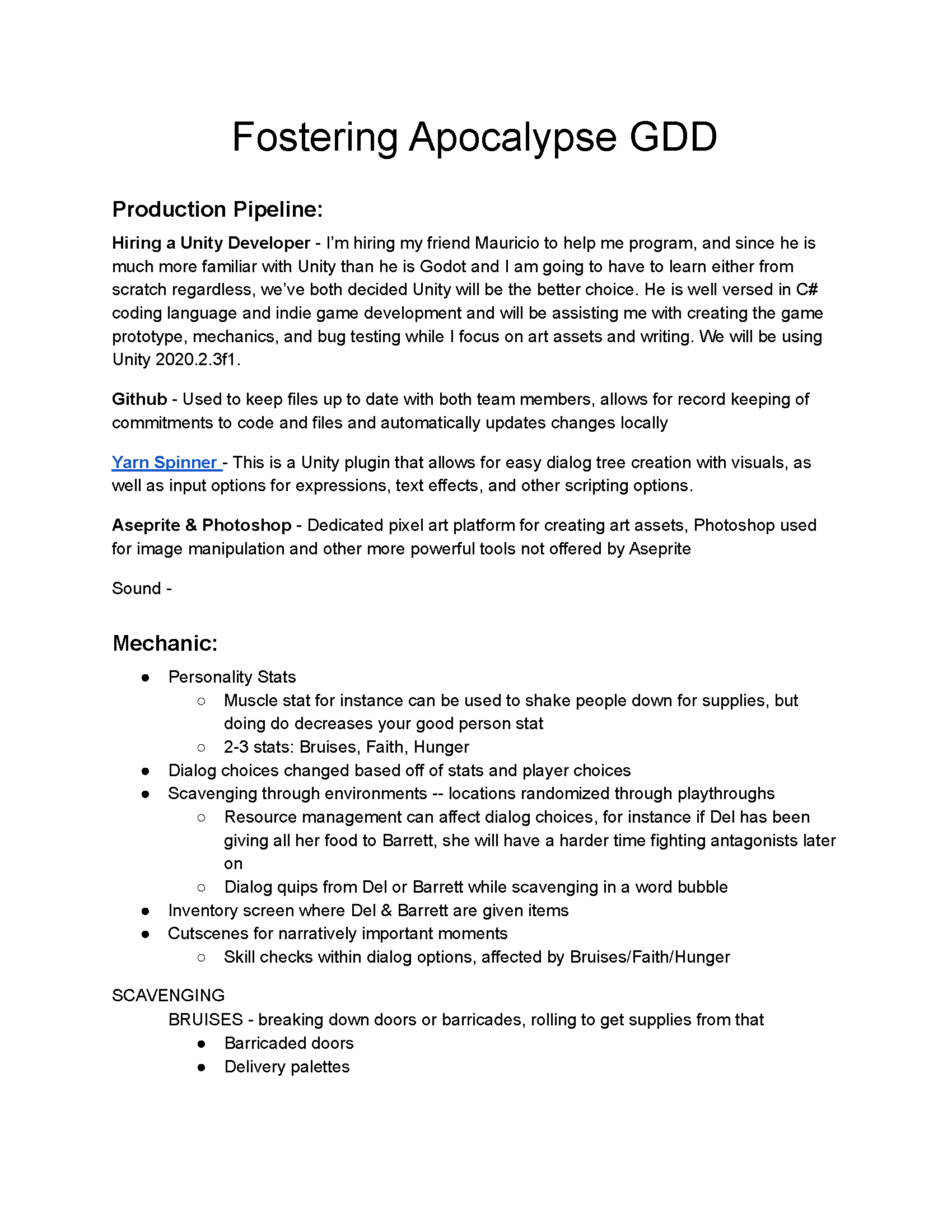 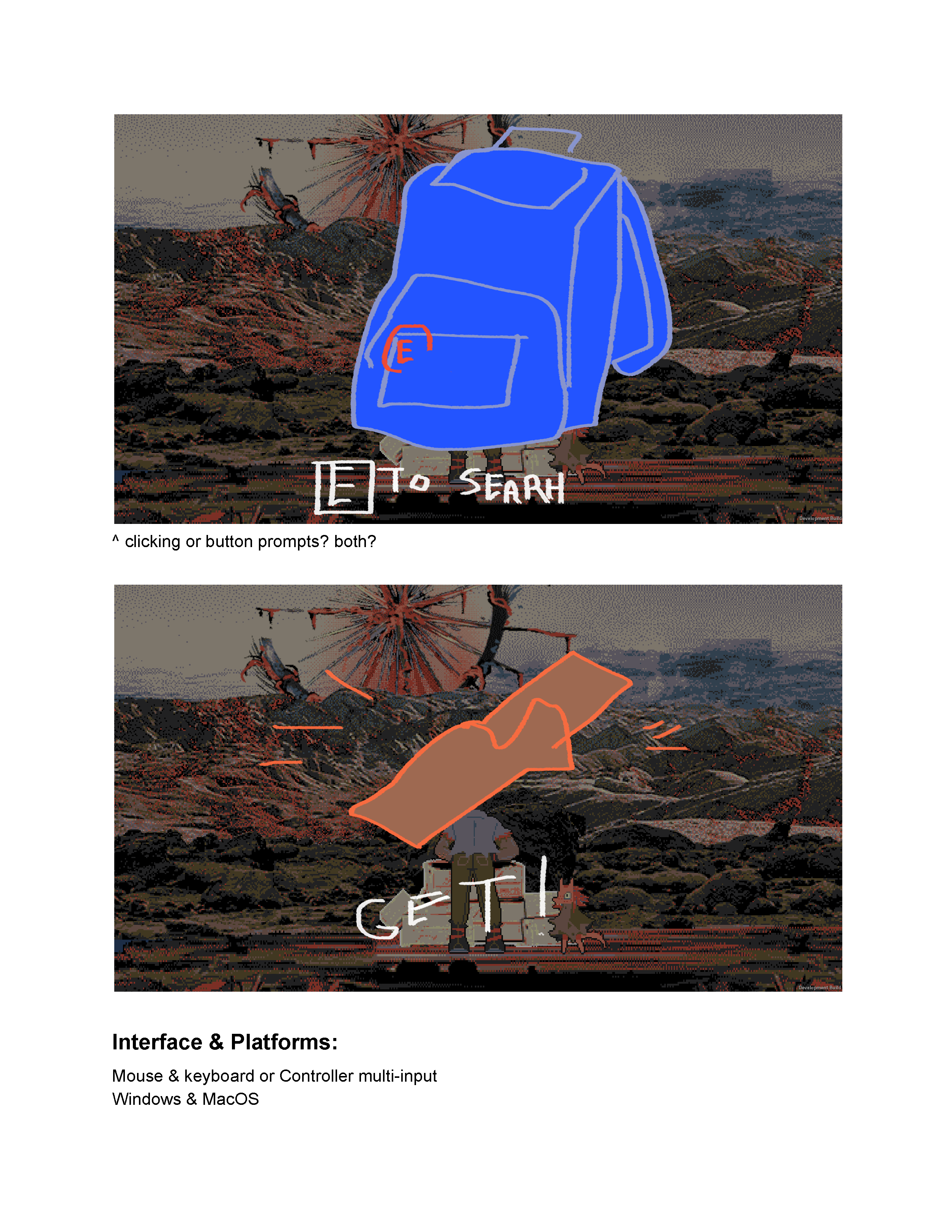 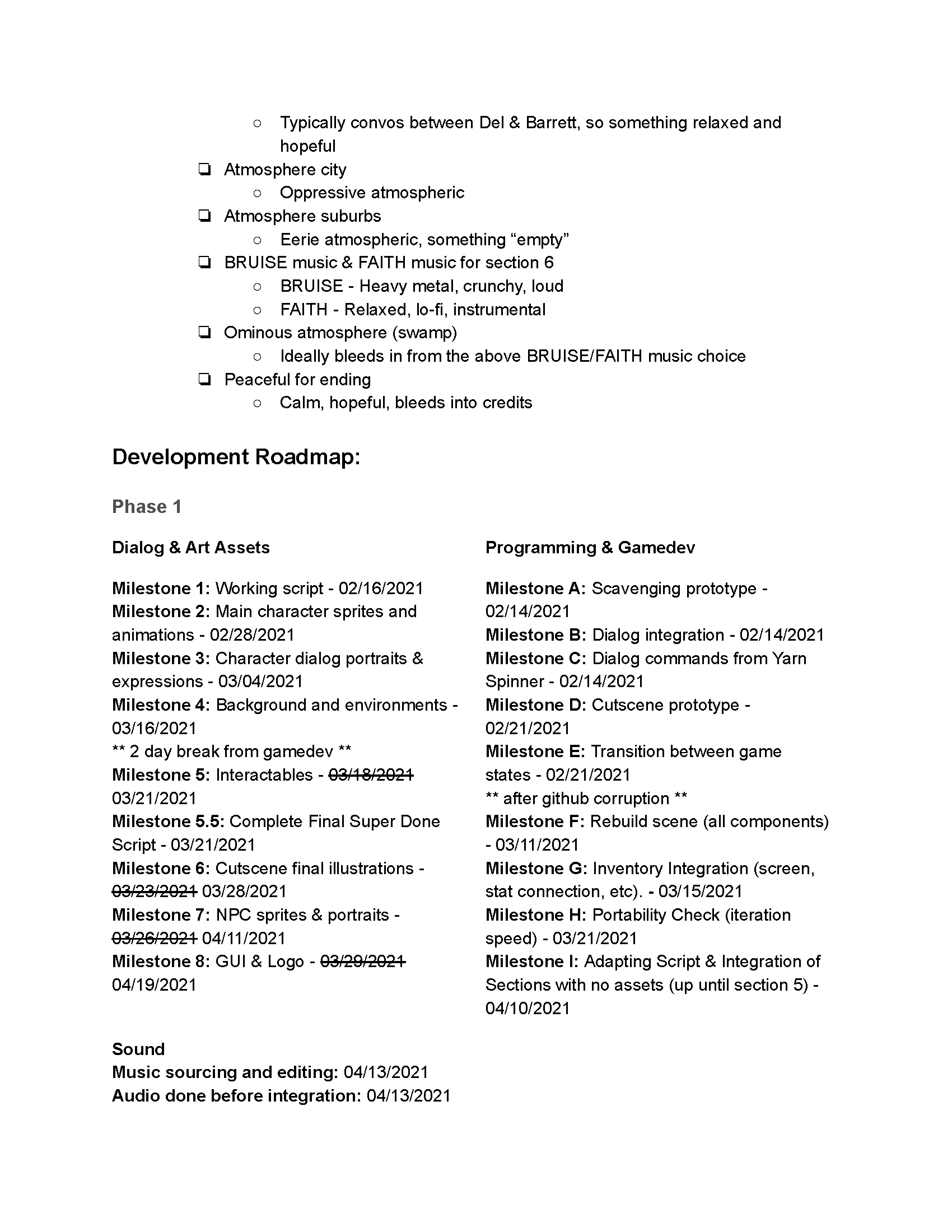 i started off by making a game design document (gdd) to include all development guidelines, visions for the game, and concept sketches for mechanics. this was an evolving document that grew and changed throughout the 4 months of development, something that the entire team referenced and utilized as development progressed. you can click through the above galleries to view it in full, including the full list of assets, stretch goals, and the project's timeline. 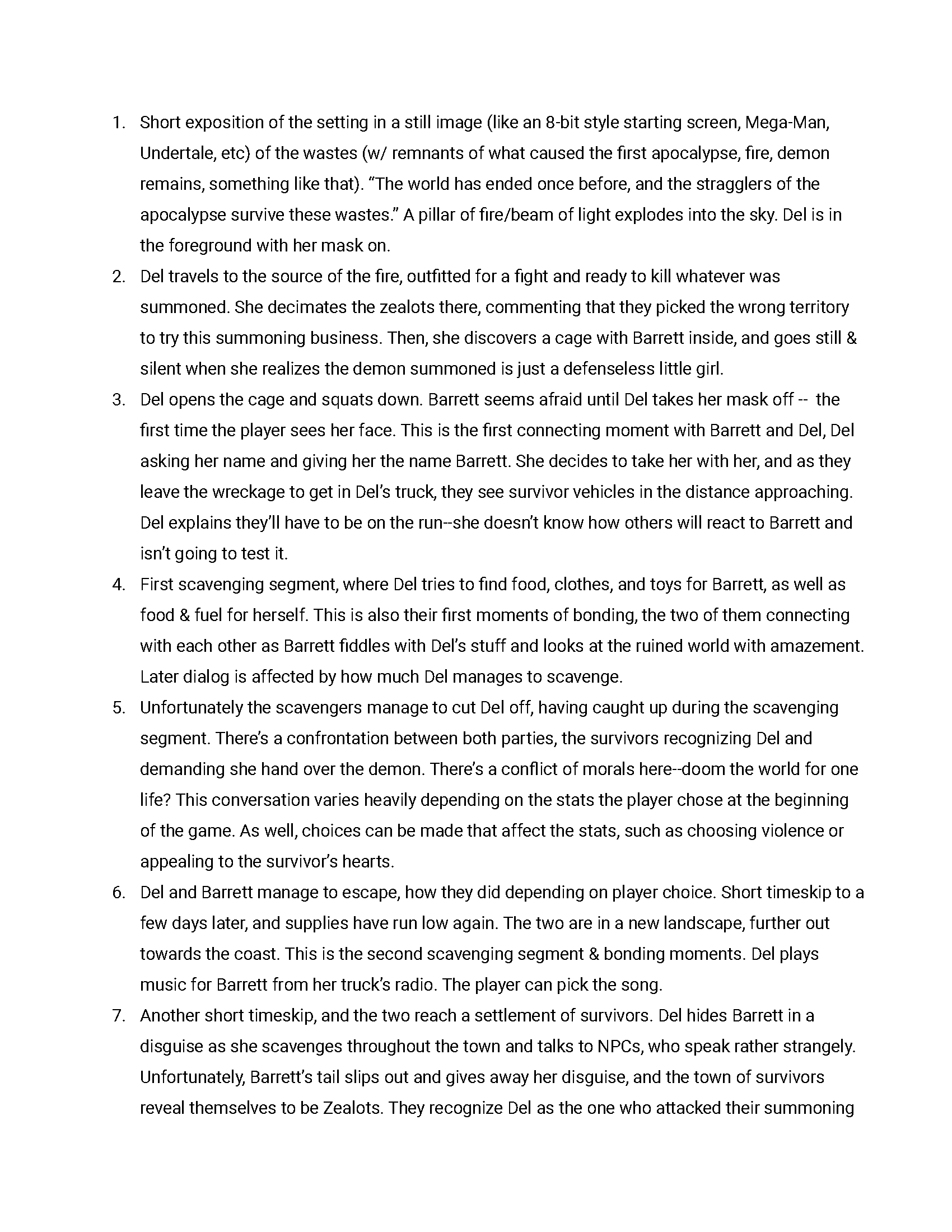 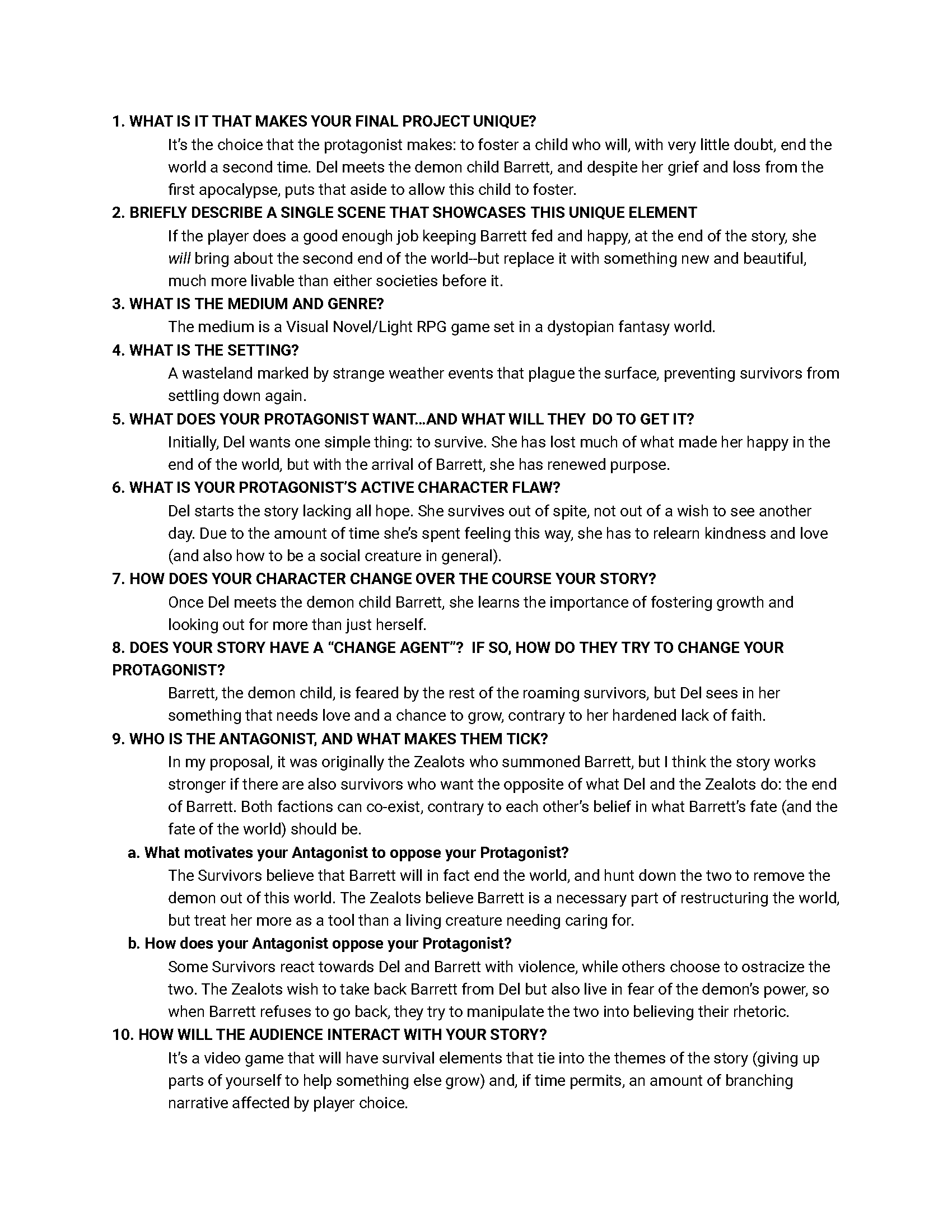 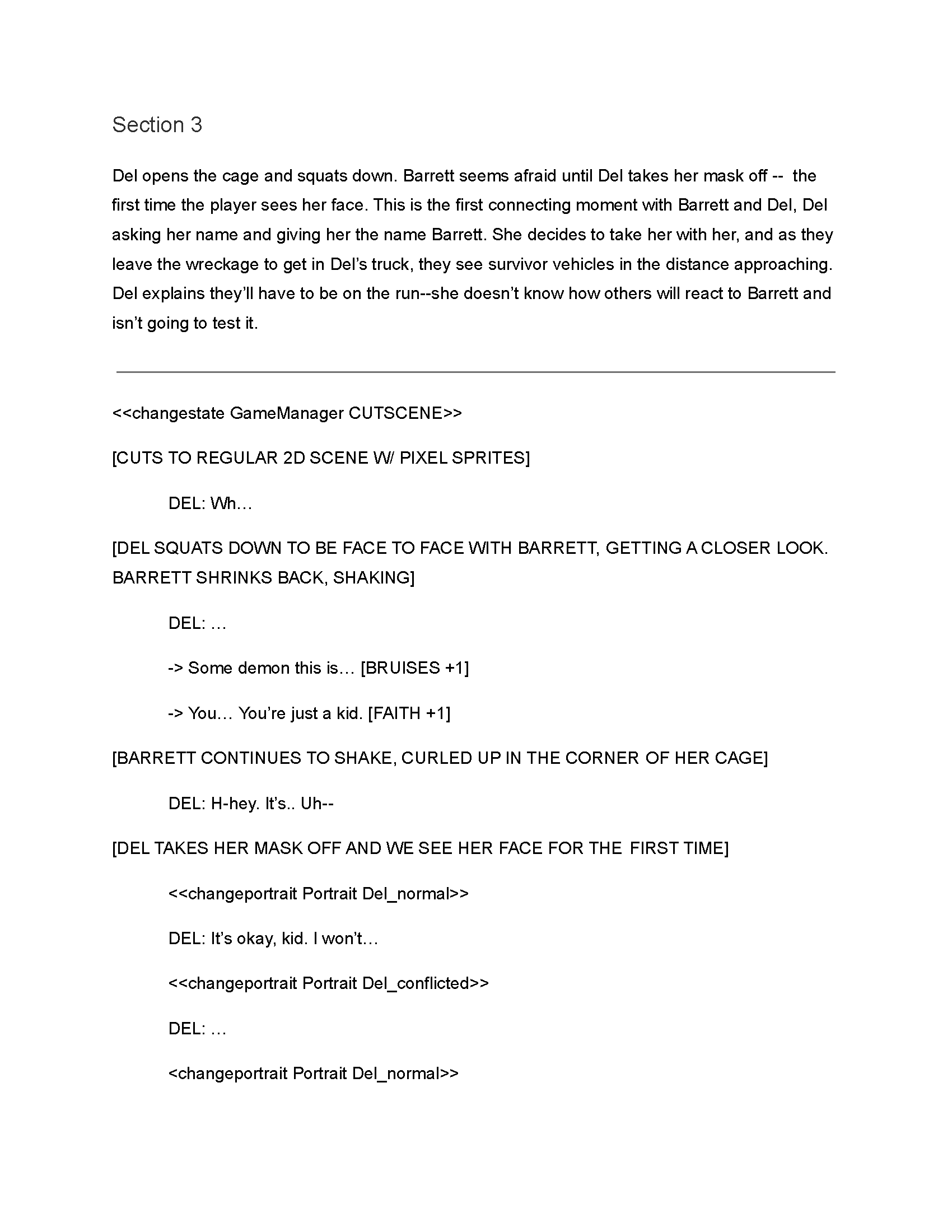 then came the writing. i started off with a logline and an outline of the story. the first pass at the outline actually got scrapped, as i felt it didn't relate to the themes of self-sacrifice and parenthood as much as i had hoped. then i moved onto the script. our programmer translated this script into yarnspinner, which called and referenced assets within the engine. this followed the outline pretty closely, with the exception of an added section to allow for greater chaarcter development between the protagonists.

to the side here is what the final script looks like inside yarnspinner, with all the sections and supplemental dialog implemented. 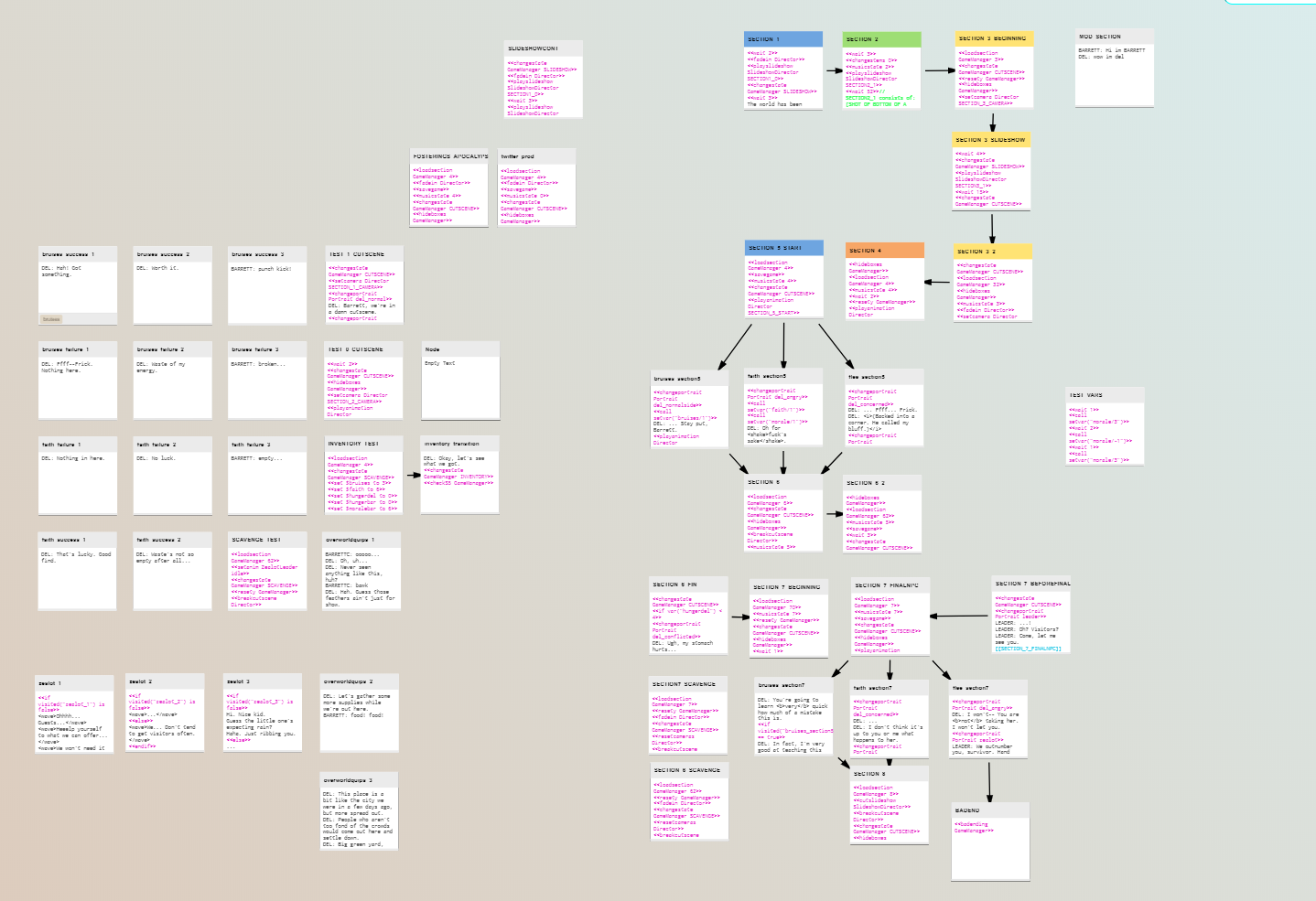 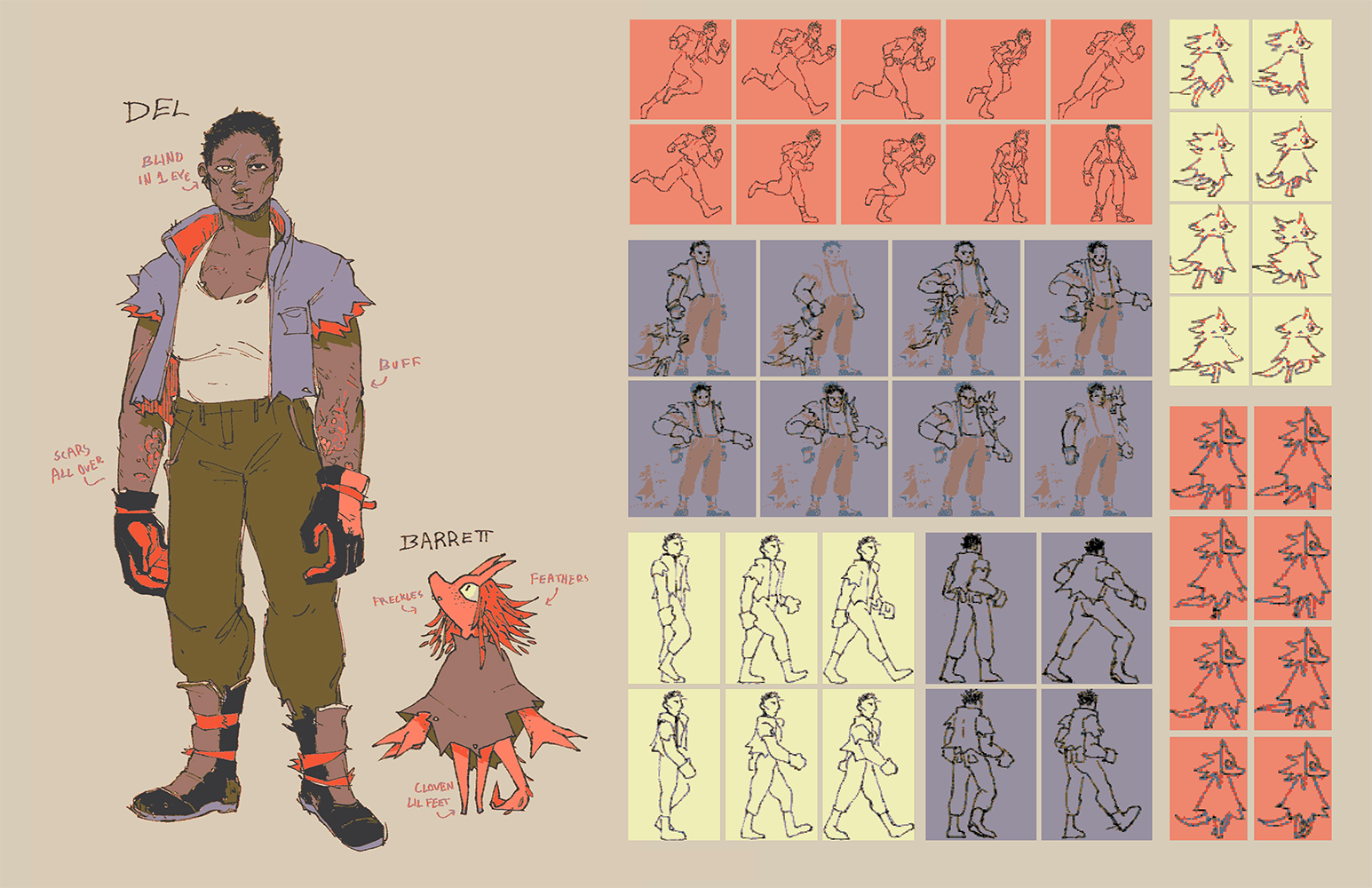 character art and spriting came next. concept art for the two protagonists lead to sketches, which were finalized into sprites in aseprite. this may well have been the longest process in asset creation, as the sprites took a lot of care and detail work. 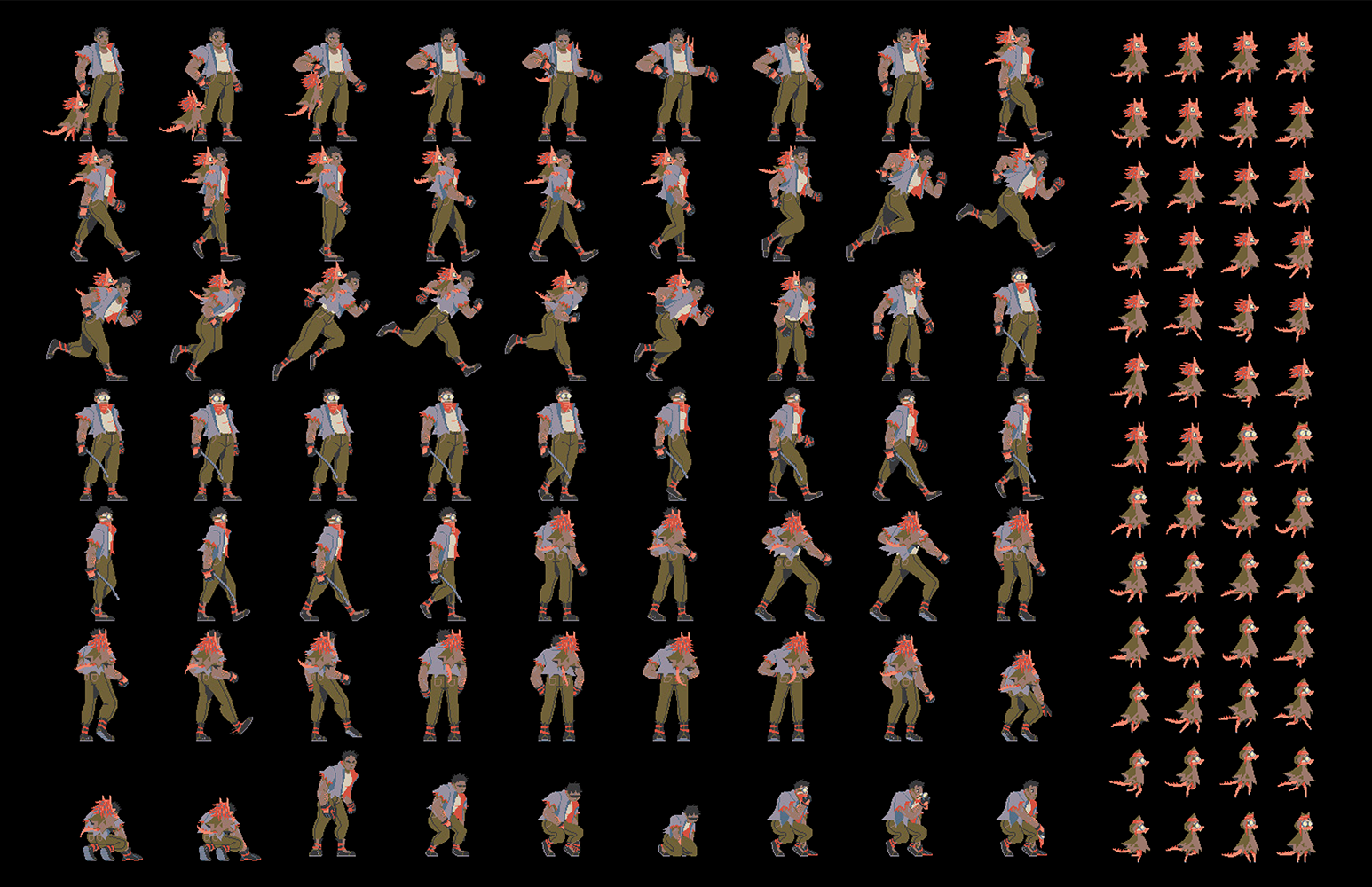 environments were made with photobashing royalty-free photos together, combining them into a single, seamless composition in photoshop. from there, i added illustrated elements on top in clip studio paint, then imported the final scaled down size into aseprite and compressed it with my color palette. aseprite offers pixel dithering filters that allowed for the environment images to maintain their depth and colorful elements despite the limited 9-color palette of the game. 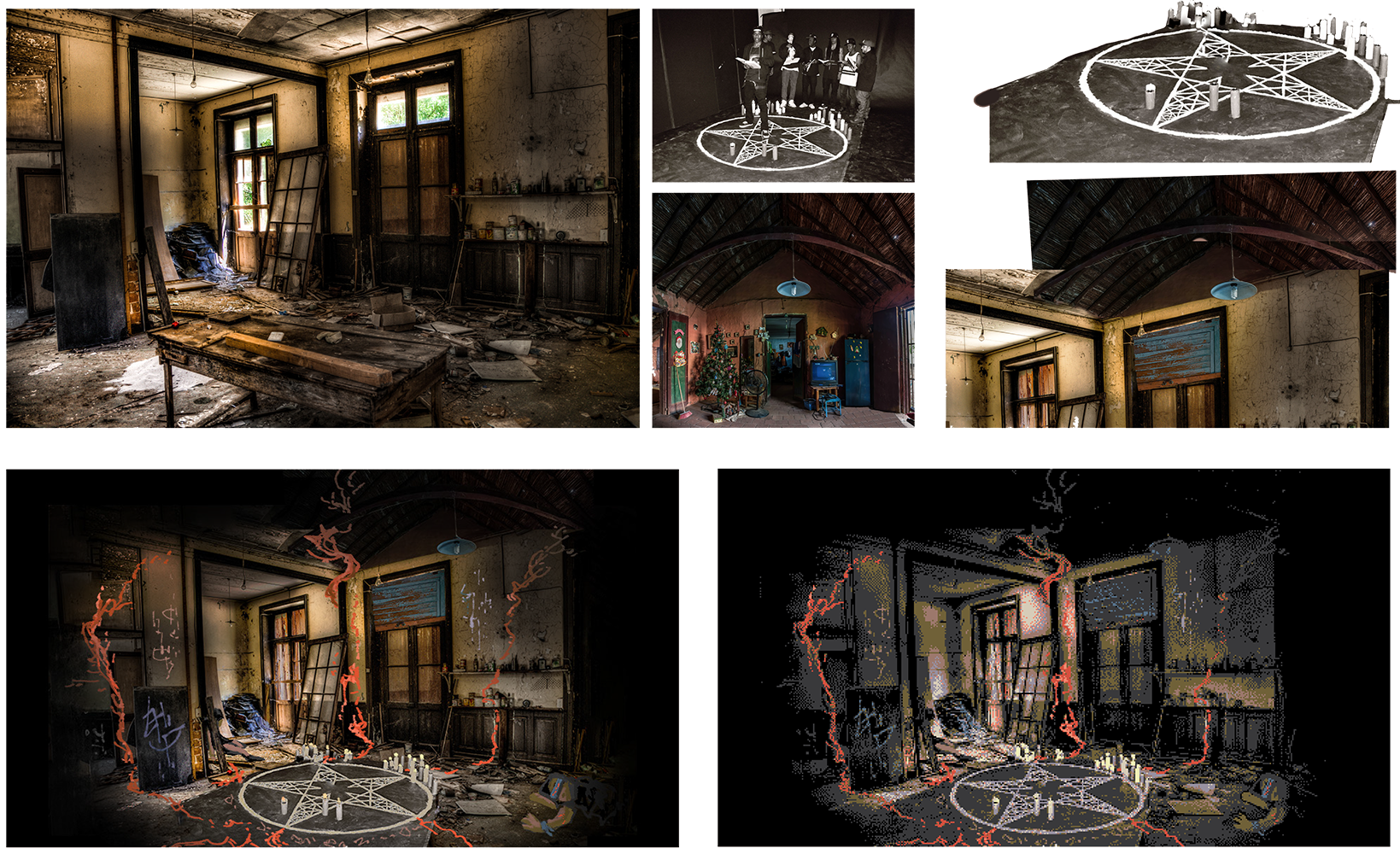 the final game came together across four months with great help from mauricio castillo. it's pay-what-you-want on itch.io and $5 on steam with all proceeds go towards the making of future games. in the first month of launch, fostering apocalypse has made nearly $1,000 USD and has been downloaded over 2,000 times, with a 4.7 star rating on itch.io. you can download it below for both windows and mac, as well as the soundtrack by ian laurence and an art book that showcases the art of the game in more detail. 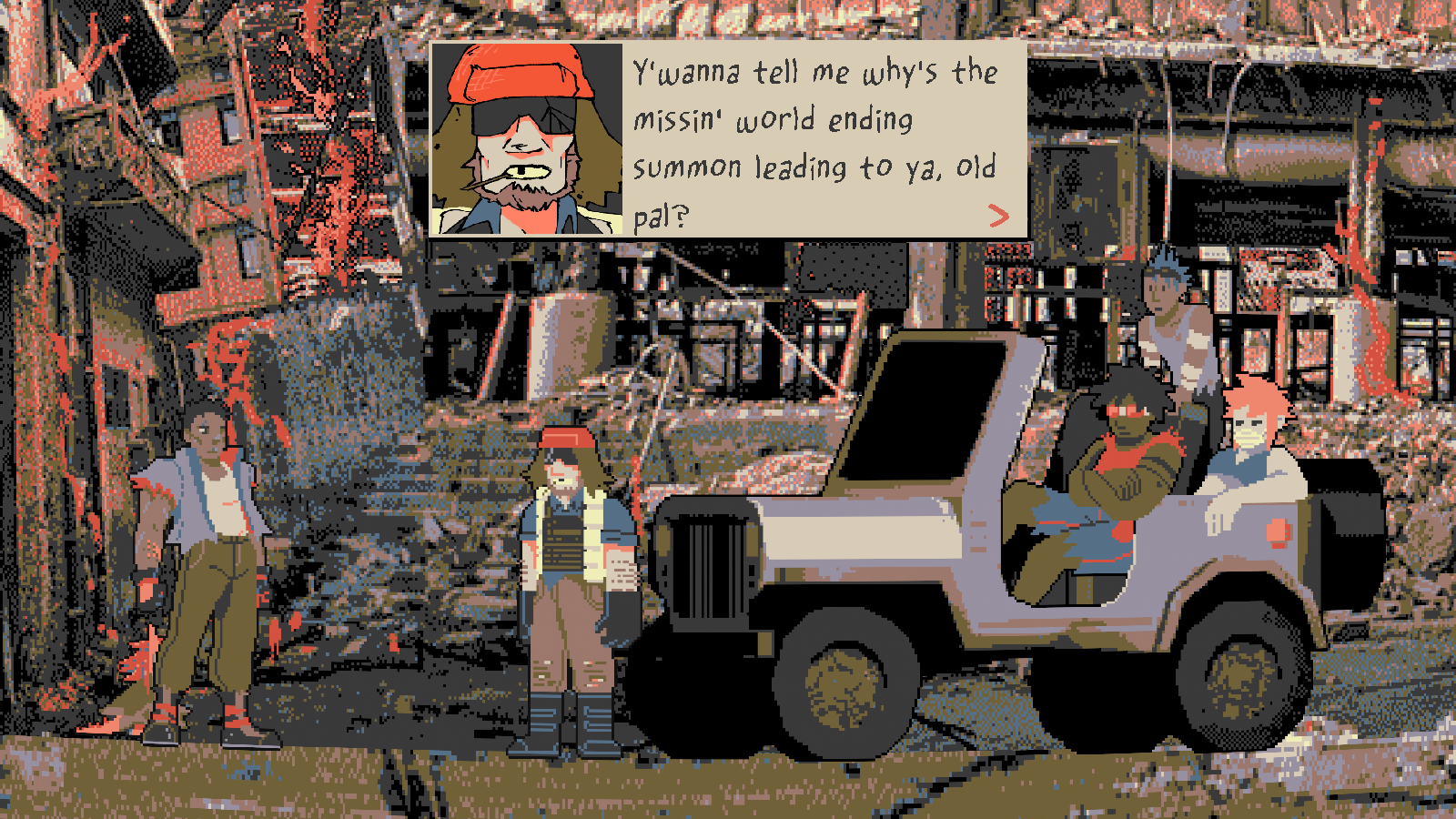